our need and desire

TCCS has a strong relationship with our host church and enjoys its wonderful facilities. As we plan for long-term growth, it is the desire of TCCS to have a larger facility that includes an office area, less daily set-up and take down, as well as a long-term commitment. So, what is our need? 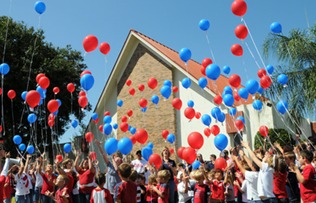 During our fourth and fifth school years God continued to bless our school, with a steady enrollment of between 90 and 100 students.  We earned full accreditation status through Christian Schools International, which is a great accomplishment for a small, young school - we continue to give God the glory!
As we recently celebrated the end of our 17th school year, we reflect back on the many blessings that God has given TCCS over the years….countless connections and friendships which have been formed over the years, numerous families who have partnered for their season of life and   the growth which has taken place not only with the students but also with the parents and teachers, 8 students who have earned a TCCS diploma and most importantly God’s faithfulness as real families with real life experiences have been on the journey together.
The blessings have been abundant.  In the beginning months, there was a day when an unexpected $100 bill came, and that same day an unexpected $100 donation was received.  A very special day was when a young fourth grade boy exclaimed, with excitement to his mom, that he now had friends for the first time, because he instantly made friends at his new school.  The blessings have been ordinary and extra-ordinary, but most importantly, God has made it very evident that His hand is on TCCS.
As we have completed our 15th school year, that original vision is still strong for TCCS to be a community school which successfully partners to educate children.  The vision for a school was only the beginning of TCCS.  This community school model is so much more than a school which children attend on Tuesday and Thursday (optional Fridays), and are taught at home on Monday and Wednesday with teacher directed lesson plans.  TCCS is a community of families with the priorities of faith, family and school.  The families have a like-mindedness which is strengthened by their participation in a Growing Kids God’s Way class (Parenting from the Tree) and Age of Opportunity.  God has blessed and is continuing to bless His people who are following him and working to raise up children to glorify and honor Him.  When reflecting on how God has used me, I think that the most important thing is to have a willing heart, and God can use you to do mighty things.  I am amazed that He has blessed me and chose to use me in such a way to serve the families of this community school.
I look forward to seeing and being a part of the wonderful plans that God has for the families of TCCS.  This is an exciting journey and I’m so glad He’s using me to partner with the families of TCCS.

“It is a blessing to be a part of TCCS as a Principal and Mom.  My prayer is that students and their families will continue to be brain smart and heart smart!” - M. Walker, principal/founder

"My kids are thriving academically and growing in their faith. We love being part of the TCCS community."

FROM OUR PRINCIPAL, MELISSA WALKER

After visiting the community schools in the Orlando area and Bradenton, God gave me the vision for a community school in the Tampa area.  After several phone calls from families who desired for a community school to be in the area, I began putting action to the vision.  A couple of hundred flyers were passed out to homeschool groups, churches, and Growing Kids God’s Way classes for an informational meeting to begin to bring people together and survey the interest.
On January 22, 2002, the first informational meeting took place at a local library.  The date of the informational meeting was spread by word of mouth, therefore I had no idea what the attendance would be.  It was all a leap of faith.  God confirmed that leap of faith when 55 people attended that first meeting, and interest continued to grow as more informational meetings took place.  Faithful attendees later met to decide upon the curriculum, mission and purpose of the school, and a governing board was formed.  The priorities of faith, family and school along with moral and academic excellence were a resounding echo throughout the hearts of the families present.  In May of that same year, Tampa Covenant Church opened their doors to the school as the pastor saw the vision for the community.  From that point, applications were received, and the summer months were busy as four teachers and six board member met families and prepared for the new school to open.

August 8, 2002 was a wonderful day!  Opening chapel was exciting as parents, teachers and children sang praises to God, planted a tree, and enjoyed a majestic dove release.  The first school year began with 42 students, Pre-K through 5th grade, representing 32 families.  It was absolutely amazing that a school was formed in such a short amount of time, but God had been working long before in the hearts of those involved.

The first school year was only the beginning.  During the second school year, TCCS partnered with 57 families to educate 78 students, Pre-K through 6th grade.  Most important was not the quantity, but the quality of these strong families which God had brought together for this unique model of education.  This was a very special year in my life as well, since my husband, Craig, and I had our first child, Braden.  I am very thankful for a community where he will grow up knowing other families who prioritize faith, family, and school.
For the 2004-2005 school year, TCCS’s staff grew from 6 teachers and an administrator to 8 teachers, an administrator, a curriculum specialist and a secretary/book keeper.  Two grade levels were added (7th and 8th grade), and enrollment increased to 92 students.  We had an unexpected need for a new location, and Tampa First Church of the Nazarene opened their doors to our school.  Throughout all obstacles, God showered His blessings and His glory upon TCCS.